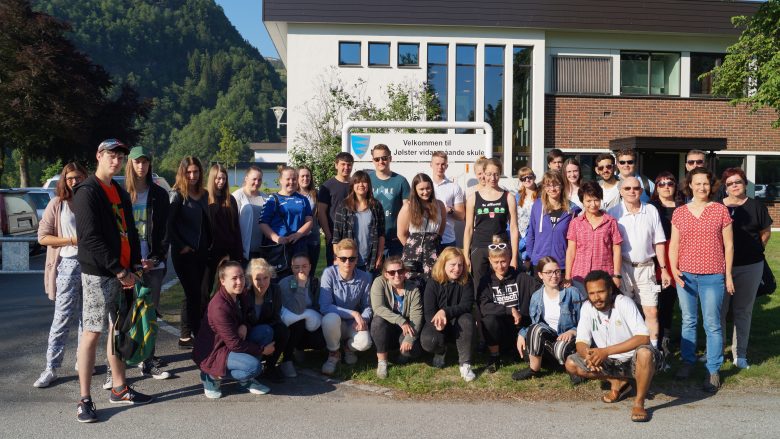 From the 24th – 31th May 2018 the project group from Germany (Vocational School Centre Wurzen), Lithuania (Joniskio zemes ukio mokykla) and Norway (Mo og Oyrane vidaregaande skule) met in Forde. We learned about the fate of the children of Lebensbornhomes because their fathers were German soldiers. We also disputed with migrants and asylum seekers and got to know about the training opportunities in agriculture and visited some farms.

Therefore we went to a farm for milk production in Sandalen where Jersey cows are bred. Additionally the farm produces energy with a hydropower plant for themselves and 500 other households. Norway gets 98 percent of their energy from hydropower plants. We also visited the old farm from the artist Nicolai Astrup which is now a museum.

Furthermore, we went to the ecological school Sogn jord- og Hagebrukskule in Aurland that is specialized in producing the best compost. They are also developing new procedures to get the best soil for agricultural use. On the school ground families of refugees are using a garden to grow vegetables and spices for their personal use. Unfortunately there are no refugees at Mo that we could have met.

Mr. Torleiv Blatt and the owner of the Hotel Stalheim reported about the fate of the children of Lebensborn. Torleiv Blatt was in a Lebensborn home when he was a child. In the Lebensborn e.V. the German “race” was supposed to be improved by Norwegian blood. The children with a Norwegian mother and a German soldier as a father where brought to those Lebensbornhomes. Although a lot of the children where made out of love they were stolen from their mothers after birth in the Lebensbornhomes and even brought to Germany. After the Second World War the mothers and their children were discriminated and contravened.

In the Lebensborn Stalheim 130 children and 10 German nurses were lodged. The children were mostly left by themselves, because of that it is very understandable why so many of those people developed personal problems later.

Additionally we learned about the documentary “The German Children” from the Swedish Scientist Rudelius which shows the discrimination and the effects through the state of Norway on these people. We agree with Mr. Thorleif Blatt that the state of Norway must take responsibility.

We were also introduced to the mobile game “My child – Lebensborn” where you adopt a Lebensborn child. The game is an opportunity to inform the youth about this dark part of Norwegian history. This is not a part of the curriculum at school.

In our free time we visited some glaciers, did canoeing, fishing, hiking and had barbecues together.

We had an informative and exciting time here in Norway and we are going to miss it.

+4797460962Our project belongs to the Students Meeting Project 2017-18 of the Vocational School Centre Wurzen.

The project get support from Erasmus+Program YOUTH in Action of the European Commission.

The project was implemented within the EUROPEANS FOR PEACE programme, with support from the Foundation” REMEMBERANCE; RESPONSIBILITY AND FUTURE” (EVZ). The opinions expressed by the authors are not necessarily those of the Foundation EVZ. The author is solely responsible for the content.

The project got kind support by Sparkasse Muldental.